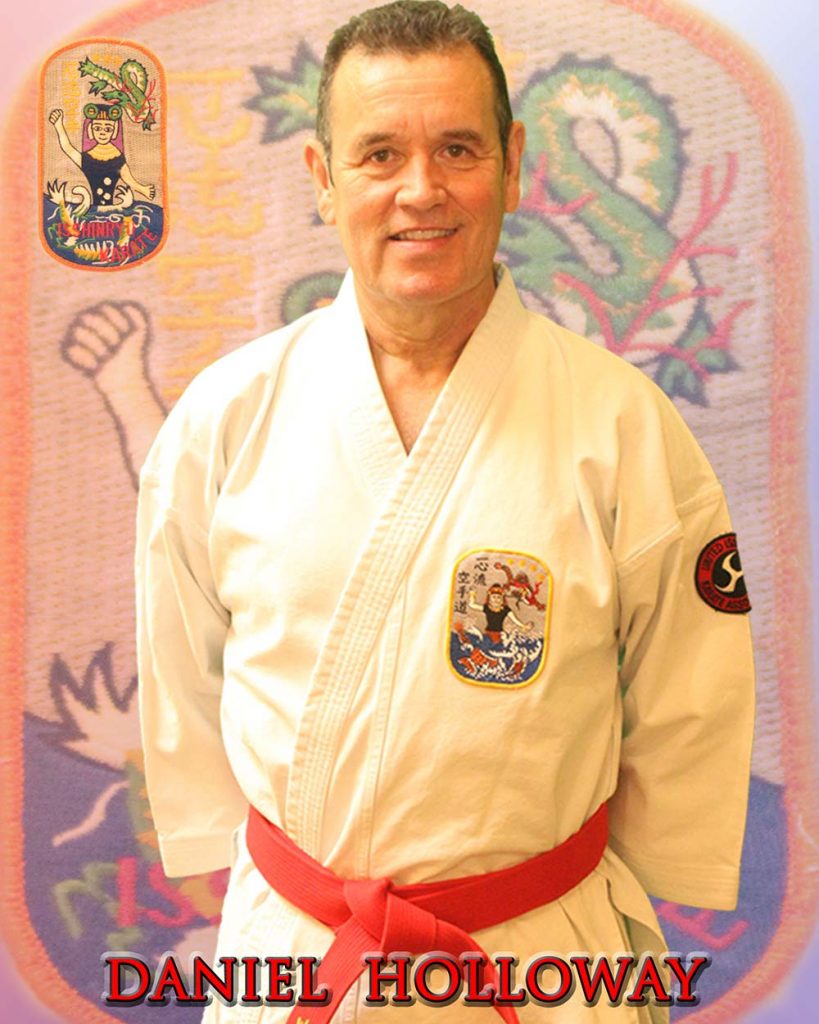 Sensei Holloway was born in Japan in 1952. His father was an American serviceman and his mother was a native of the country. Sensei maintains his ethnic traditions and speaks conversational Japanese.

Sensei Holloway began his martial arts training in 1968 at the age of 15 under Mr. Norbert Donnelly. Sensei Donnelly was a world class tournament and kickboxing champion. Sensei Holloway’s black belt was confirmed under the direction of Louis Grinnell and he went on to receive the rank of 6th Dan under Allen Wheeler. In 1997 he was given the rank of 7th Dan by Sensei Harold Mitchum (10th Dan-Hanchi); also confirming was the late Sensei Sherman Harrill (7th Dan). Furthermore, Sensei Holloway was given a 10th Dan at the passing of Grand Master Harold Mitchum in 2016.

Both men were Okinawan-trained by Master Shimabuku, with Mr. Mitchum receiving the distinction of Head Dojo instructor and highest-ranking American. Sherman Harrill was a leading seminar instructor and held rank in weapons (Kobudo). Sensei Holloway was promoted under Sensei Mitchum to 9th Dan on July 9th, 2014, following with the “Hanshi” honor title in Februrary, 2016.  Sensei Holloway gives credit to these many fine men in his karate career.

We are a Tokushin Kobudo Dojo as well.  Teaching the methods as passed to us under Tokumura Sensei and Sensei Jeff Perkins.  Tokumura Sensei is a friend of Isshin Ryu and one of the dojo instructors for Master Shimabuku.  Tokumura Sensei is an honorable and giving man, wanting to share the Okinawan legacy of weapons with us.  I am grateful for his teaching and hold the rank of 5th Dan in this style of Kobudo.

Sensei Holloway is also the winner of many awards himself. He was the OKU Kumite champion.  He is a two time recipient of the Master Shimabuku award, Master’s Division Kata Champion for Isshin Ryu’s largest tournament the “Hall of Fame” 2005, and in 2008 Sensei Holloway was inducted into the Isshin-Ryu Hall of Fame.  He was inducted into the Legion of Honor in 2020.  He was recognized for his community involvement and former recipient of the “Outstanding Young Men of America Award”.  Sensei Holloway finished post graduate work and was published in 2014.

Mr. Filby began his training in 1981 when the karate school first opened. He has trained in several different karate styles and has a diverse knowledge of the arts that he utilizes in his instruction. Drawing from a military background, Sensei Filby’s rigorous Thursday night class challenges and delights his students.

One of Sensei Holloway’s senior instructors. Has been in Isshin Ryu since 1981. Sensei Bowman is an excellent teacher and technician. He works well with both adults and kids giving practical application to complex movement. Mr. Bowman has lived in the community for over 40 years and is dedicated to improving our students through disciplined instruction.

Marianna has trained with Sensei Holloway since 1996. She competed and won numerous trophies in tournament competitions. She served as the lead instructor for the kids classes, and brings a fresh perspective to teaching the younger students. Marianna has a bachelor’s degree in Music Education from Oakland University and works as a paramedic for Star EMS and Pontiac Osteopathic ER.

Mrs. Hupman is Sensei Holloway’s daughter and has been training in the dojo since 1997 (from the womb since 1974). She is instrumental in making sure all aspects of the karate school are running smoothly while juggling her own two young children! Mrs. Hupman is an outstanding teacher and works as a pediatric nurse.

Brent, a 4th degree Black Belt, was promoted to San Dan and has been a student for 10 years.  He is a professionally trained Physical Therapist and adds much to our staff.  He is a big help in the kids classes and lends much of his knowledge of body mechanics to the other students.  He is extremely talented with a thirst for learning.  His participation, cleaning, making weapons, and “fixing” in the Dojo is appreciated.  Wise beyond his years he is respected and admired in the Dojo.  Brent’s two boys serve in the Dojo as well.

Bill is a 3rd degree Black Belt and has over 8 years in our Dojo.  Mr. Bill is one of our most dedicated instructor/students and helps in both kids and adult classes.  He is a former Marine that enjoys our team oriented and family structured atmosphere.  Mr. Bill is a favorite among the kids and their parents for his firm, but caring attitude.

Sensei Chay was a friend and protector for everyone that entered the Dojo. He expected the best from students, yet found ways to pick them up when they fell short. He did not like it when people sold themselves short and made excuses.  He wanted people to find value in others.

He started his karate training at the Holloway Dojo in Keego Harbor in 1982. He was an excellent kata practitioner. Sensei Chay held the record for fastest to black belt at 4 years. He was a blast to fight with, often surprising his opponent with his quickness, but his best fighting skill was his attitude. I never saw him take out his frustrations on classmates. Sensei Chay was good for the dojo, always looking beyond himself to create a great place to work out and learn.

Always a positive force – he never made himself out to be someone he was not.  He is loved and missed.

If you're interested in checking out our classes before you sign up, you're welcome to observe. You can even try one week for free.